A few weeks ago the Monday Night Gamers got together and I ran Speed Rally for  the first time.  The racers were drawn from a plethora of TV shows and movies from the 60’s, 70’s, 80’s, 90’s and the new century!  I created each of the cars and racers within a 2000 point range and tried to base the abilities and skills of the cars and their drivers from what I could remember from the shows and wikipedia…

The boys had a dice off and selected cars by the highest roll.  To even out the playing field, those who got first pick got last positions on the starting grid.
The order was: Magnum PI’s Ferrari 305 GTS (Seth), Walt Kowalski’s Gran Torino (Gord), The Oscar Mayer Weinermobile (Phil), Ghost Buster’s Ecto 1 (Mark), The 1965 Batmobile (Sean), The Delorean Time Machine (Rob). 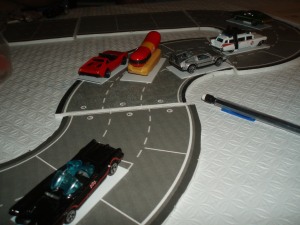 The first lap: a little bunched up in the beginning, the Torino took an early lead but was soon to spinout!

As this was my first time running the game I did run into a few speed bumps (pun intended) with the rules, and I had overpowered a few cars, but overall we had a good time! 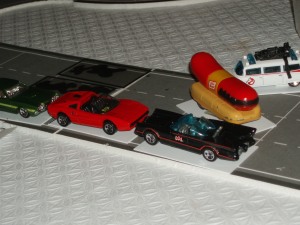 The race had a suitable number of spin outs, a few nasty weapons (the Wienermobile was armed with 3 catapults, one ketchup, one mustard, and one relish).  Unfortunately, the final lap is where my inexperience with the rules shone through.  On the final stretch the Batmobile and Wienermobile decided to team up and block/bash/ram anyone who tried to make a dash for the finish line. With the ambush strategically set up just after an oilslick, both Ecto 1 and Magnum’s Ferrari fell victim. I was unsure how to handle multiple rams in a five car pile up.  Inexplicably, the Gran Torino (from the movie of the same name) made it through and claimed second place. 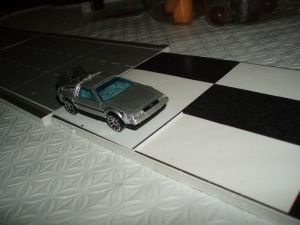 The Time Machine wins by a landslide

For a first time playing, I think everyone had a good time.  As usual, I got a little jumpy when I am not completely versed in the rules and made quick and sometimes not necessarily good decisions on the fly glossing over some rules, forgetting others.  My track was printed on to sticker paper and then attached to foam-core, I probably need a way to secure the track to the table to prevent shifts and some better way to line the pieces up so they aren’t so jagged…

I would love to play this game again and have been brewing an idea for the next Cangames in Ottawa:  THE PISTON CUP! 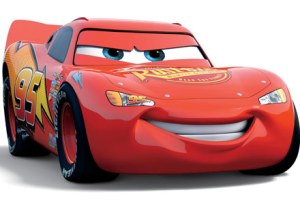 37 year old man obsessed with little plastic and metal men/women/orcs/goblins/ghosts/mice/tanks in modern/historical/futuristic settings. Attempts to roll dice to win a variety games and inevitably ends up rolling "1"s when he needs "6"s. END_OF_DOCUMENT_TOKEN_TO_BE_REPLACED
This entry was posted on Friday, August 26th, 2011 at 4:42 am and posted in Speed Rally. You can follow any responses to this entry through the RSS 2.0 feed.
« Random thought for the Week
Wings of War battlemat »